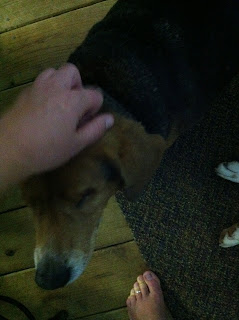 his owner was going to put him out for the pound because he was moving, and my cousins took him in. shortly thereafter, they had to have an operation to remove one of his eyes. a year later, the other one was also removed

i was thinking about his heightened senses, and in particular his sense of smell. the other dogs on the property are wary of me because they aren't familiar with seeing me, but i think chance can remember my smell from trips long ago, (and let's be honest, he's the one i always pet because he's just so meek and precious)

tonight he smelled the cardamom muffins i was making on my hands (and my cousin said she smelled sausage as they were cooking, so maybe he got a taste of that also)

i was also thinking more about scent in terms of my perfume/performance practice. in trying to find new and different avenues for my scent to travel, for the work to be about something more than just my body, or pheromones, i have a hard time determining what the reactions might be. how do i measure what i'm doing? (granted i have creative license to falsify things whenever i want, but that's not nearly as interesting) here's a specific reaction to the work in new york:

it certainly made an impression on me..;-)..I still can sense the fragrances from the day i met you..what a sexy perfume!

not that all responses have to be attraction, i still have a hard time intentionally smelling bad. i'm more interested in creating memory in people, helping them identify a new sensation, and connecting that to a narrative, or geographical location 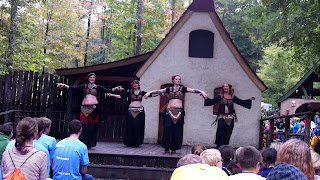 i also ended up going to a renaissance fair today, and they were selling fragrant oils like dragon's blood, and sagitarius! so i figured i might find a few new ingredients. simply lifting the bottles i could see the substance was not oil but alcohol, and they were just ghastly sweet. no wonder so many people don't like commercial perfume or cologne

there's a power in utilizing more natural substances, spending time researching the best sources for raw materials, and dedicating my body to the distribution of memory connected to them