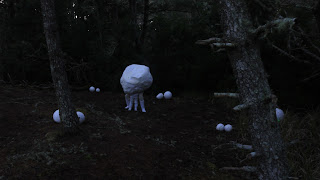 i made our costumes using papier mache and white paper as the outer layer instead of paint. i used chicken wire inside my costume for support, and realized i at the end i could just take a big breath and rip the entire armature out of the sphere and it actually worked. i made iggy a costume as well, and he wore it in our house a few times; i did not know if he would agree to wear it when the time came 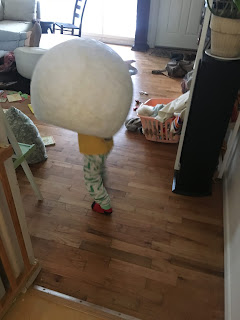 i affixed helmets to the tops of both of our costumes hoping to bring some stability, but as the crowd gathered outside of our performance site my helmet broke loose. i had to just set it aside and move forward. iggy, of course, would not wear his costume 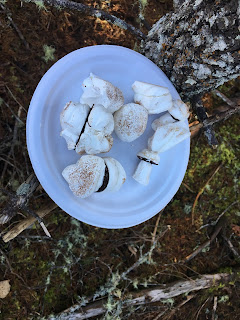 he was eating one of the meringue mushrooms i made to give away so i invited him into my costume--had the chicken wire been present that wouldn't have worked. in the end it all came together and i'm inspired to continue examining both the culinary threads in my work, and the desire to incorporate my biographical situations, ie: parenthood